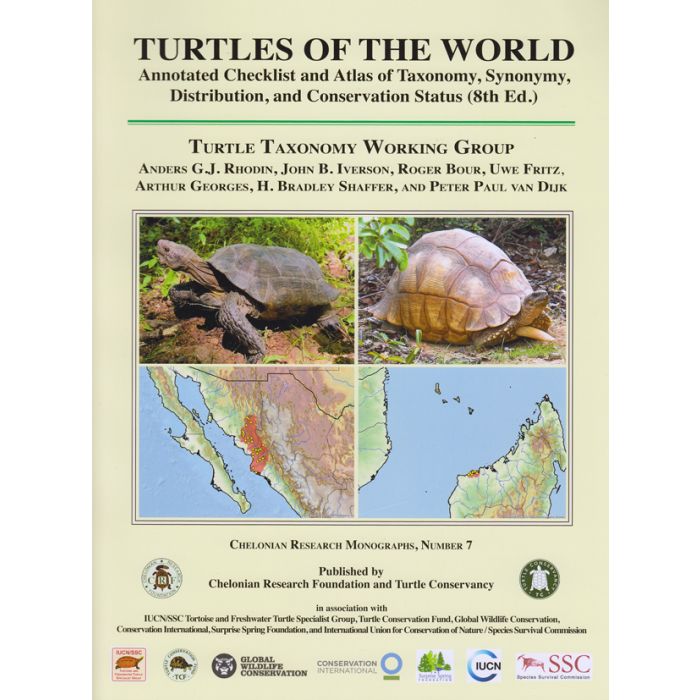 8. Auflage New York 2017, kartoniert., 292 Seiten, sehr viele Farbfotos und farb. Karten. This is the 8th edition of an annotated checklist of all recognized and named taxa of the world’s modern chelonian fauna, documenting recent changes and controversies in nomenclature through early 2017, and including all primary synonyms, updated from 7 previous checklists. The books provides an updated comprehensive listing of taxonomy, names, and conservation status of all turtles and tortoises of the world, including detailed distribution maps. The authors strive to record the most recent justified taxonomic assignment of taxa in a hierarchical framework, providing annotations, including alternative possible arrangements, for some proposed changes. The book includes common English names and detailed distributional data for all taxa, listing occurrence by countries and many smaller political or geographic subunits (states or regions), including indications of native, extirpated, and introduced (modern or prehistoric) populations. The diversity of turtles and tortoises in the world that has existed in modern times (since 1500 AD) and currently generally recognized as distinct and included in this checklist, now consists of 356 species. Of these, 60 are polytypic, representing 122 additional recognized subspecies, or 478 total taxa of modern turtles and tortoises. Of these, 7 species and 3 subspecies, or 10 taxa (2.1%), have gone extinct. As of the current IUCN 2017 Red List, 148 turtle species (60.4% of 245 species listed, 41.6% of all 356 recognized modern species) are officially regarded as globally Threatened (Critically Endangered [CR], Endangered [EN], or Vulnerable [VU]). This book records additional draft Red List assessments by the IUCN Tortoise and Freshwater Turtle Specialist Group (TFTSG) of previously “unevaluated” species, and updated draft re-assessments of previously listed species, allowing us to evaluate the overall current threat levels for all turtles and tortoises. These numbers and percentages of Threatened species have increased since our last checklist. Turtles are among the most threatened of the major groups of vertebrates, in general more than birds, mammals, cartilaginous or bony fishes, or amphibians.